Murdoc Alphonce Niccals was born in Stoke-On-Trent on June 6th, 1966. Although the exact whereabouts were never verified, it was rumoured that his mother gave to birth him at the Belphegor Sanatorium, a halfway house for "the sick, the needy and the incredibly bored."

As an infant, he was dumped on the doorstep of his father's house one night and was discovered by him as he was returning home from the pub.

Murdoc went on to a very abusive childhood. It has been proposed that his many addictions and his sour attitude were due to his abusive childhood. His father, Sebastian Jacob Niccals, (or Jacob Sebastian Niccals, depending on who's asking) was a spiteful drunk of a man who often verbally abused and exploited his sons.

During his childhood years, Murdoc attended Sodsworth Comprehensive School where he gained a reputation for his truancy, puerile pranks, ugliness, poor personal hygiene and generally unruly behavior. Despite all this, he was also the target of much bullying both from the pupils and the teachers. From the first day, he would frequently be found in the corridors and propping up walls outside of the classrooms during lessons, distracting the other students with "endless quacking noises and pointless, malicious humor". His form teacher, Mr. Gravadlax, a man described by Murdoc as "turning up stinking of poppers", described Murdoc as "an appalling student" and "a stupid imbecile who often turned up smelling of whisky". Although, even as a child, he had charisma, had a great knack of getting his acquaintances to see things "the Murdoc Niccals way" and certainly stood out. Murdoc was also bullied at school by a big, thick, meaty skinhead lump of a boy with arms like two racks of kabob meat named Tony Chopper. Murdoc got back at Tony by calling him a lot of offensive and extremely harsh names, ultimately calling him "a useless, bloated backward waste of space who would probably get a job of holding up 'For Sale' signs on the corner of streets only to then get himself fired and replaced by a bucket of soil" and that "a pissed monkey would stand a better chance in life", which resulted in Tony punching Murdoc in the nose, breaking it.

The local pub had a routine talent show called the "Are You A Star?" talent contest that Murdoc was often forced to participate in so he could win his father's drinking money. The performances arranged by his father were always humiliating song and dance numbers, usually with feathered costumes and tap shoes, including one performance in which Murdoc was forcibly dressed up as Pinocchio and sang "I've Got No Strings". It was from here on out that Murdoc decided to become a musician, and he would never again take the stage under someone else's direction. He would wreak his havoc on this world of buffoons.

Murdoc dreamt about becoming a famous musician and leaving Stoke-On-Trent. After becoming a Satanist, he began making deals with the devil and came to an arrangement with him. If Murdoc was to become a famous rock star, he would offer Satan his soul. When the deal was finalized, Murdoc acquired Satan's bass guitar "El Diablo" and his middle name was changed from "Alphonce" to "Faust".

Murdoc played in a number of bands before Gorillaz, though they never went anywhere. The names and instruments of the other members appear in the Gorillaz 2005 promotional booklet and are given as follows: Billy Boy (who is based on a character in A Clockwork Orange) and Tiny on guitars, Crunch on drums, Rocky on keyboards, and Munch, who appears to be listed as "Band Artist." Not much else is known about these characters including their personalities or current whereabouts, although they appear on a few pieces of official Gorillaz artwork, most notably in the previously mentioned booklet as well as in Kong Studios, where an image of Crunch, Billy Boy and Tiny can be seen on the wall in the instrument room.

At some point in the early 1990s, Murdoc founded a band called, Murdoc's Burning Sensations. Not much is known about the band outside of being a featured headliner for a concert at the Withered Hand in Stoke-on-Trent on November 29, 1994. It is assumed that the band broke up at some point prior to 1997 due to unknown circumstances.

On August 15, 1997, Murdoc and a gang of criminals were on a crime spree in a stolen Vauxhall Astra. Their next target was Uncle Norm's Organ Emporium where Stuart Pot (AKA 2-D) was working. Murdoc launched the car through the shop window, crashing directly into Stuart's face, putting him into a coma and giving him an 8-ball fracture on his left eye. After the incident, Murdoc was arrested and was sentenced to 30,000 hours of community service and spending 10 hours a week caring for Stuart.

One day while skidding his car around a car park in Nottingham, Murdoc accidentally sent Stuart flying through the windshield into a curb, giving Stuart a fracture on his right eye, yet waking him up from his coma. Impressed by Stuart's appearance, describing him as "a blue haired, black eyed god", Murdoc recruited him as the lead singer and keyboardist for his band and gave him the nickname 2-D for the two dents in his head.

2-D was born on May 23, 1978, to David and Rachel Pot. His real name is Stuart Pot (his last name was often thought to be Tusspot, though his father changed his name to "Pot" shortly before Stuart was born to avoid him from getting bullied at school), but is often shortened to Stu-Pot. He was born in Crawley, England and was being educated at St. Wilfred's School (the same school that educated the members of The Cure). His father, David Tusspot, worked as a mechanic and owner of the Tusspot's Fairground. His mother, Rachel Tusspot, was a nurse who supplied Stuart with headache pills from his tree accident. While Stuart wasn't a very intelligent boy, he was known as a kind person and had a general love of music. His parents recall a little ten-year-old Stuart bouncing around in his room listening to The Clash, Agustus Pablo, The Human League (this band was his favorite) and many other musicians of the sort. He hit his head when falling from a tree at the age of eleven, causing all of his hair to fall out. When it came back it was a deep 'azure blue'.

On August 15, 1997, when he was 19, the drama in his life began, as hooligan Murdoc Niccals, age 31, purposefully crashed his Vauxhall Astra through the wall of Uncle Norm's Organ Emporium, where Stuart had been working, in an attempt to ram-raid it and steal the synths. Murdoc's bumper crashed into Stuart's face[1], landing him with an 8-ball fracture also known as 'hyphema', although he could still see through his injured eye. Murdoc was arrested and sentenced to carry out 30,000 hours (1,250 days) of community service as well as care for the vegetablized Stuart for 10 hours every week.

One year later, in a poor attempt to impress some women, Murdoc performed a 360 in a Tesco car park in Nottingham with his vehicle. This sent Stuart crashing through the windscreen, hitting his head on the curb, fracturing his other eye. When Stuart awoke after sliding through the cement for about a mile, he turned to look at Murdoc. This was the moment when Murdoc knew he had his front man. "A blue-haired, black-eyed god", Murdoc recalls. Murdoc nicknamed Stuart '2-D', which stands for the "Two Dents" in his head.

Russel was born in Brooklyn, New York on June 3, 1975. Known for his good manners and eloquent speech, he attended the Xavier School For Young Achievers, but was expelled after attacking several students while possessed by a demon. He fell into a coma for the next four years, at the end of which, the demon was finally exorcised from his body by a priest named Father Merrin.

After his old school refused to take him back, Russel attended Brooklyn High School, where he befriended many of the students that were gifted in hip-hop music.

One rainy night outside a 7-Eleven Store, Russel's companions were killed in a drive by shooting by a gang of "gang bangers" driving a black Humvee. They were all wearing red hooded tops. One of them was wearing a black hood who Russel identified as The Grim Reaper. After the shooting, the spirits of Russel's friends came to reside in his body, the most prominent being Russel's best friend Del tha Ghost Rapper. 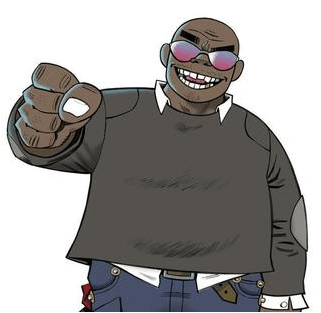 After the drive by shooting incident, Russel was sent to the UK for his own safety to live with his uncle in Belsize Park. He got a job working behind the counter at Big Rick Black's Record Shack in London's Soho area. That's when he first encountered Murdoc Niccals. While asking Russel for an obscure 50s record, Murdoc slipped a bag over Russel's head and forced him out of the shop. Russel was taken back to Kong Studios and was impressed with the music that Murdoc was working on, so he chose to stay.

Noodle was born in Osaka, Japan on October 31, 1990. She spent a portion of her childhood in Japan as a subject of a classified Japanese super soldier project under the management of the Japanese scientist, Mr. Kyuzo.

Noodle, along with 22 other children, were trained with the sole purpose of fighting as soldiers of the Japanese military and government. After the children were deemed too dangerous and unstable for combat, the project was scrapped. Mr. Kyuzo was then ordered to dispose of all possible traces of the failed experiment, as well as its participants.

After killing the other 22 children, Kyuzo was reluctant in killing Noodle. Rather than killing her, Kyuzo placed her in a state of amnesia through the use of verbal commands. The phrase used to place Noodle in her state of amnesia was known as Ocean Bacon. After temporarily clearing her memory of the project, Kyuzo smuggled Noodle to the United Kingdom in a FedEx crate and falsely reported her death (along with the other 22 children) to his superiors. 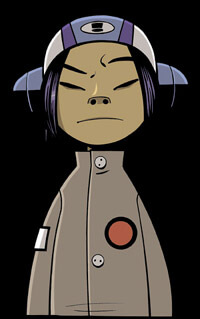 Noodle arrived at the doorstep of Kong Studios in 1998. Once the crate was taken inside, Noodle sprung out of the box and performed a guitar solo (which 2-D described as "200 demons screaming in Arabic. Brilliant!"). She ended her solo with a 20-foot high karate kick and saying some words in Japanese before bowing and saying the word "Noodle". This resulted in her earning the name "Noodle" (her only currently known name) and replacing Paula Cracker as the band's lead guitarist. 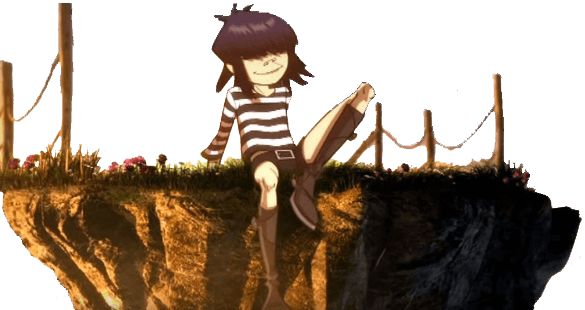